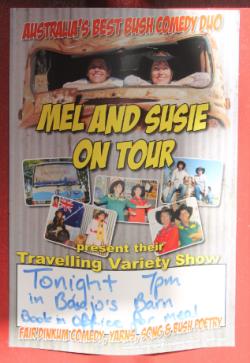 We were planning to free-camp at Long Waterhole just outside of Winton, but so many people said “You have GOT to see Susie and Mel at the Matilda Caravan Park!” that we decided to stay there instead. (As it was, there were people visiting the show who were camping out at Long Waterhole anyway!)

There were several dinosaur places in the area, and I needed to catch up on some work, so we decided that Rob should go out to The Age of Dinosaurs to check it out, then we’d both go to the Dinosaur Stampede the next day.

We didn’t get to see Susie and Mel the first night, because we caught up with Bruce and Marg Gow from What’s Up Downunder instead for a drink and a chat. As it happened, Susie was carrying the show by herself because Mel was over in Edinburgh finding 3 different venues for their performance at the Edinburgh Fringe Festival.

Susie was, in a word, brilliant. No wonder the word has spread about ‘The Girls’. I watched while Susie wandered around to visit each table before the show started, chatting to everyone there. “Where are you from? Didn’t I see you here on Monday night… and Tuesday night? Well, I’d better make sure I don’t use any of the same content…” I commented to Susie that someone who had seen the show three nights in a row said that she didn’t repeat anything. She just laughed, and told me that when Mel was there they could go for fourteen nights without repeating content!

Susie held the audience effortlessly throughout, and has a wonderful sense of timing. So our verdict is: Yes, if you’re in Winton (or anywhere else around the country where the girls are performing) go and see them!

After coming from the comedy performance at Ilfracombe put on by Jesse, Cathy and family, we were intrigued to find that it was Jesse’s mother who started the performances at the Shed at Winton a number of years before. Now Jesse’s kids are carrying on the tradition.

Rob enjoyed his visit to The Age of Dinosaurs. He said he probably preferred it to Dinosaur Stampede, which we saw a few days later – a bit more going on. He liked being able to watch people at work at “Prep a Dino”, the hands-on workshop, and of course there’s the added advantage that it’s closer to town. 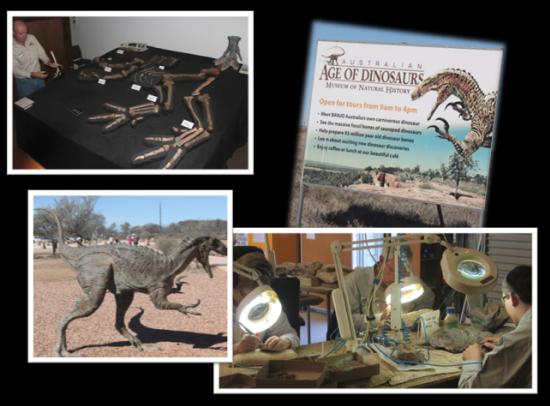 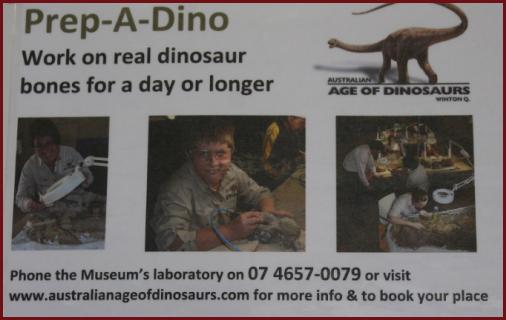 We opted to take a day tour for the 220-kilometre round trip to Dinosaur Stampede. Terry and Doug Fisher were on the same bus, and both Rob and Doug agreed that it was nice to have a break from driving and just hop on a bus and listen to a commentary! (Not to mention that it’s a dusty and bumpy ride for your 4WD.) The tour was $75 a head and included transport, a running commentary on vegetation, landforms and the residents from our driver Tanya,  morning tea (cake, biscuits, tea and coffee) and the Dinosaur Stampede guided tour and commentary. It’s pretty amazing to gaze down at all those dinosaur footprints as the guide (our guide was Bill) points out how the baby dinosaur prints cluster around those of the mother. There’s a self-guided walking tour afterwards, with panoramic views of the surrounding countryside. 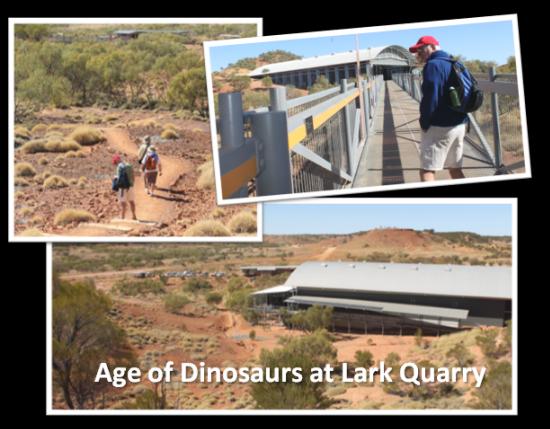 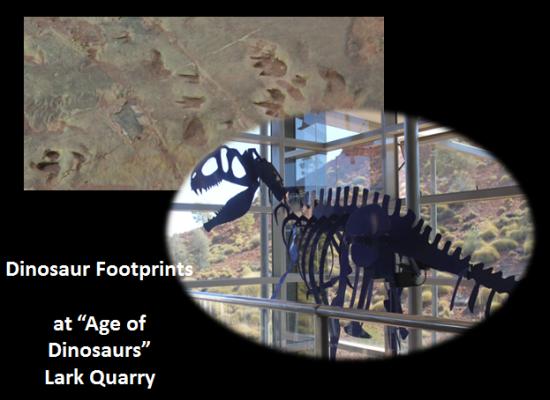 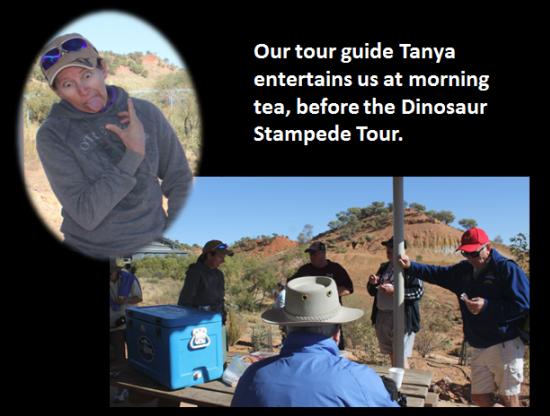 Terry and Doug Fisher were tucking into breakfast as we hitched up and left Winton. One last tip from Doug: “It’s worth taking a look at the Texas Longhorns at Charters Towers!” We didn’t make it this time… but it’s on the list, Doug: it’s on the list!

Oh, one last thing… we didn’t get to stay at Long Waterhole as planned, but we did drive out and take a look for future reference. It’s a pleasant spot and the campers set up there looked supremely content. You might, though, have to drive around a bit to find a flat spot to set up; some of the waterfront spots are corrugated at might not be very comfortable (or easy to get into/out of). Some pics: 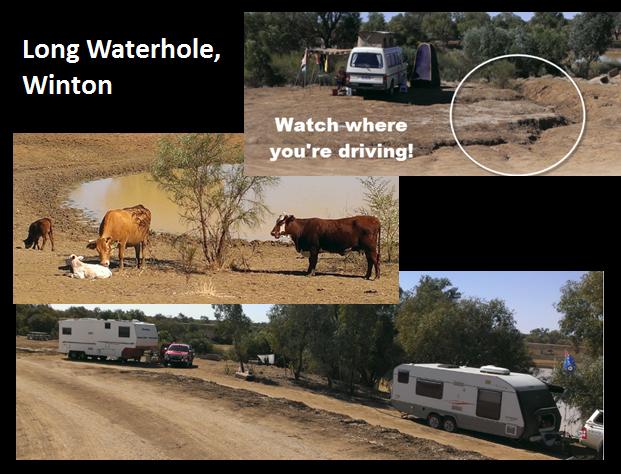