Okay: this is a girly post, so blokes – don’t waste your time. It’s all about making a tabletop cubby for when the grandkids come to visit.

Last week, I knew I had a babysitting day coming up: Cedar and Josie (aged 4 and 3) were arriving at 8 am and their cousins Isaac (3) and Lincoln (1) were coming to join them for a playdate. I went out to pick up some supplies: new play-doh; an extra kiddie chair; Wiggles yoghurt – you know the drill.

While I was picking up the chair in Kmart, I spotted a play tent. It looked easy to put up and take down: just a flip-up pirate-theme tent with a few supporting rods. Hmmm, I thought: kids love to play in cubbies. I’ll buy that.

Back at home, I decided to have a trial run at putting it up.

The supporting rods had to go in place INSIDE the tent. The problem was, the only access was a small doorway cut into the fabric, with a roll-down door attached. A KID-SIZED door. To reach the rod pockets, I had to practically climb in. Aaargh. 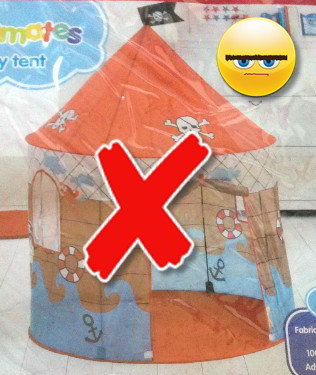 Half an hour later (HALF AN HOUR!!!!) it was finally up. Leaning to one side, and looking as though it would topple over if someone breathed on it. And oh yeah, with a diameter of 100 cm, you’d be lucky to get two kids inside, let alone four. Forget about any toys.

Moreover, the ties that secured one of the inside rods were missing, so it kept moving out of place.

Did I want to go through this every time I wanted to put up the tent? NO.

Would my grandkids even play in it? Probably not: what could they do? Stand up and look at each other? Sit down hugging a teddy bear or a toy truck and talk?

Nope. This tent had to go back. I set about taking it apart again, reflecting sourly that life had been a lot simpler with my kids: all they did was throw a blanket over the kitchen table and they had a cubby. Of course, the blanket did keep sliding off unless it was anchored with a few heavy objects, but still…

I stuffed the reject tent back in its bag and went to the linen closet to search for some old sheets. Oh, wait, we just moved house and I gave away all the old sheets. Darn.

But what was that, lurking up on the top shelf of the linen closet? Aha, a single doona cover with skateboarders all over it. I’d added it to an online order for $10 a year or more ago, thinking it might be handy one day for a child’s bed. I could cut that up!

I dragged it out, grabbed an old stained doona from the ‘take to the tip’ pile in the garage, and measured up the table. Great: I had plenty to make a tent that would just flip into place over the table. I dug some old shadecloth out of the Caravan Corner to make windows, and set up the sewing machine. 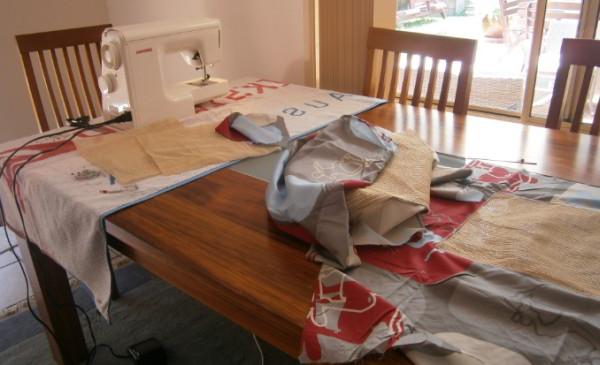 By dinner time I had a tabletop cubby that rivalled the Taj Mahal. Four kids could easily play inside, along with a large assortment of toys – which they happily demonstrated the next day. My in-house supplies and a few hours of my time gave me a much better result than the $19 dud from Kmart. 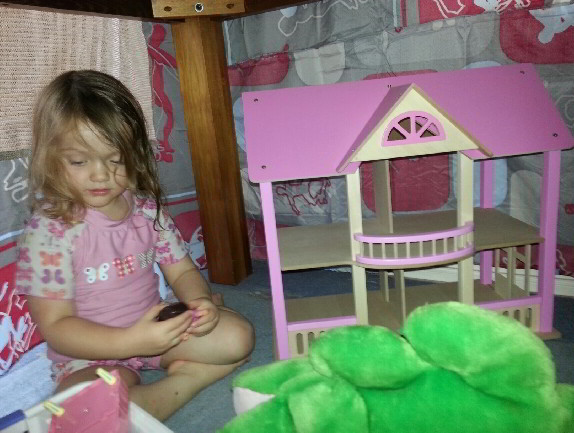 And finally… it all folds up and fits on the top shelf of the linen closet between visits.