Three years ago, while doing our Big Lap of Australia, Rob and I met Bernie and Linda Davidson. At that time they were staying in the caravan park at Wagga, while Bernie was working a split shift on the school bus run. We got chatting – as you do – and Bernie invited us to come and visit him on his claim at the Grawin Opal Fields.

On site at Bernie’s

This winter, we finally took him up on his offer. We left Walgett and found Bernie and his son Nathan waiting for us at the turnoff to Grawin. That was the beginning of a fascinating three days.

It’s the first time we’ve been out this way (nor have we ever been on a mining claim) so we had no idea what to expect. We wound through a landscape featuring old car bodies, mining shacks, caravans and quirky humour (people out this way like to use the doors of old cars as signposts).  It looks a bit like a zillion ants have been hard at work, digging up white dirt and piling it up in mounds all over the place. Some of these mounds are small (from where exploratory drills have been sent down); some, where trucks from the mines dump opal dirt, are huge. That’s where tourists and locals alike go ‘specking’,  or ‘noodling’ for opals. This involves turning over the chalky rocks, searching for potch (a line of dark colour in the rock) or a glint of colour.  Sometimes, they are successful; they might find anything from a tiny pocket of opal that can be cut and polished to something larger, that might bring them thousands of dollars. (Those finds are rare!) Some enterprising locals create jewellery not only out of opals, but out of the potch that many others discard. 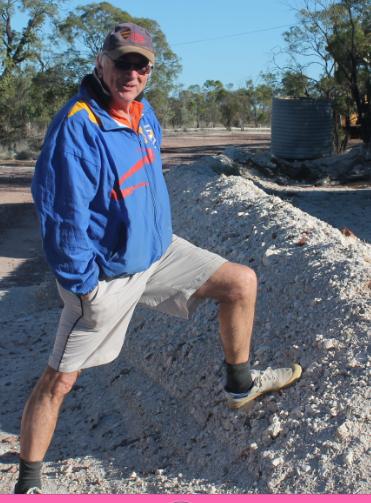 Rob, looking at a typical mound of dirt from the mines

Living out on the opal fields, you get a sense of the community out here. Like any small town, everyone knows everyone else. You can stay at free camps in several spots – Sheepyards, Club in the Scrub, Glengarry Hilton – or if you prefer to have water and power on tap, there is the Beefwood Downs caravan park.

Rob and I both tried noodling, and were terrible at it. Rob at least found a tiny gleam of blue that Bernie later polished for us. (If he’s lucky, it might be worth five dollars.) Nathan, on the other hand, has a keen eye for potch, having grown up coming to the opal fields every winter; he seemed to be able to spot it at fifty paces.

As usual, a huge part of our enjoyment of this part of our trip was meeting and chatting to the locals. While having drinks at The Club in the Scrub we met Angie, the friendly barmaid who came out here from Canada for a visit nine years ago and ended up staying. To my question: “Is it okay if I take a photo?” her reply, with a hearty laugh, was “A photo? Well, my hair’s not done, I’ve got no makeup on, I’m tired and I’m cranky, but why not?” Well, if that’s Angie on a bad day, the club has itself a top employee. 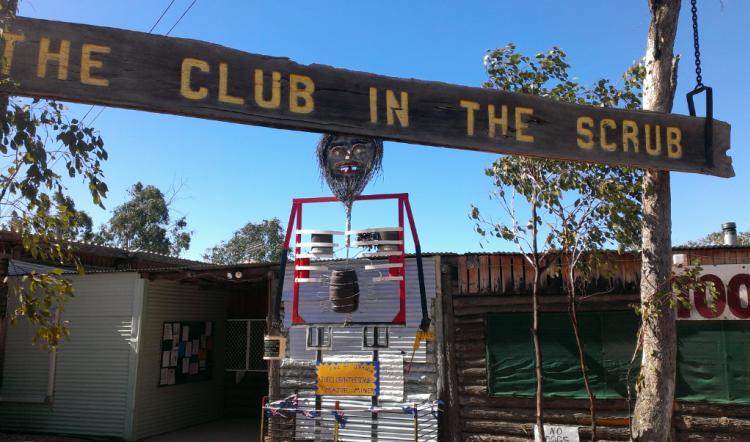 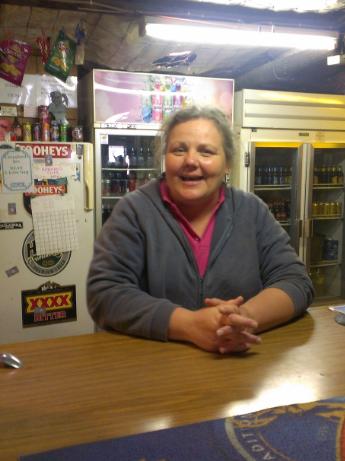 Angie, the friendly staff at Club in the Scrub

Then there was Mark, who was a fount of information about the local area and who was doing what. Mark has owned a claim at Glengarry, sold up, then returned and bought a new place.  Right now he is busy renovating, but also cuts and polishes opals and potch and makes jewellery.

Laurie and Lorraine (who, like Bernie, travel around with their caravan when they’re not spending time on their claim) own a miner’s shack near Bernie, as well as a working mine. We were thrilled to be able to go down into the mine and watch him at work, as well as poke around the exploration tunnels that went off in all directions. 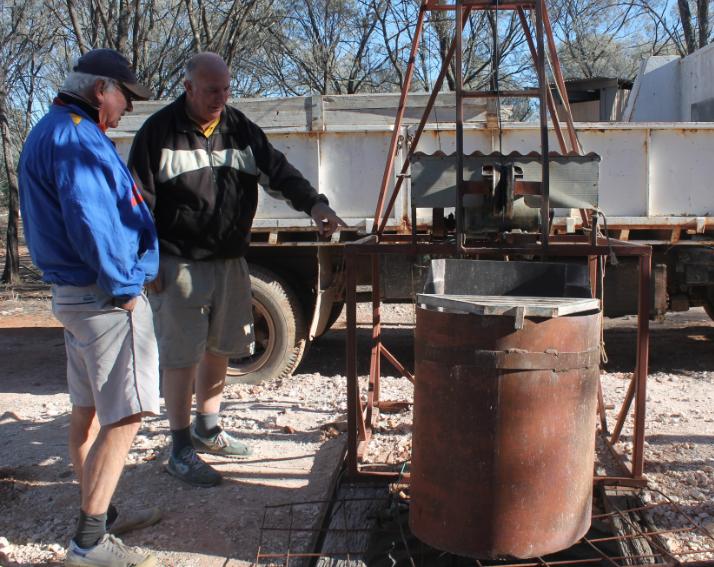 Bernie points out the entrance to Laurie’s mine.. yep, we have to climb 32 feet down a ladder… 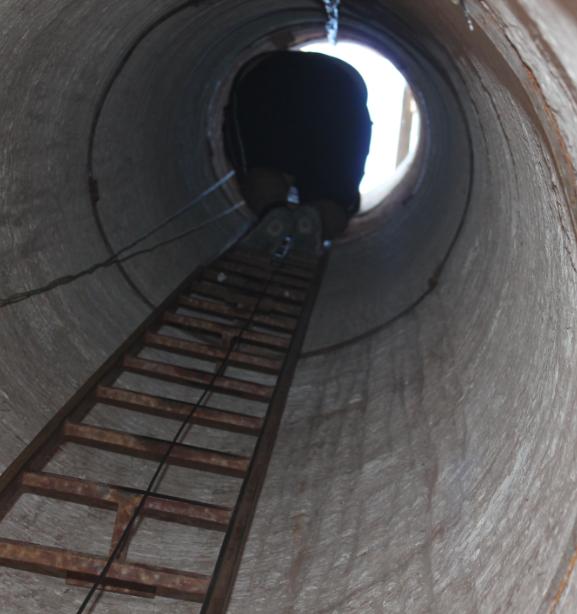 Nathan climbing up the ladder at Laurie’s mine

We could see the veins of potch that makes miners sit up and take notice; they follow the potch and – if they’re lucky – find pockets of opal. 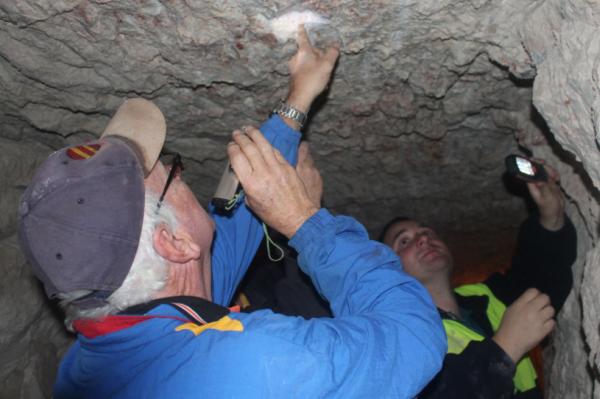 Looking for colour in the mine

(Laurie, although always hoping for the day when he’ll make a good find, maintains a healthy skepticism about opal mining. What he’d like to know, he says, is how much money goes into it compared to how much money comes out. He has a feeling that for most people, it would be more money going in.) 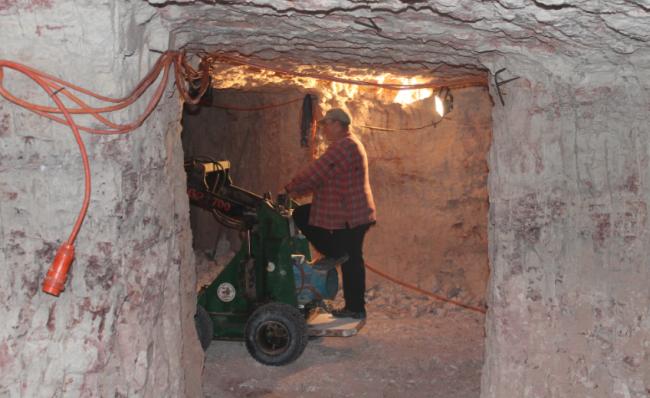 Laurie working in his mine, digging the tunnel. 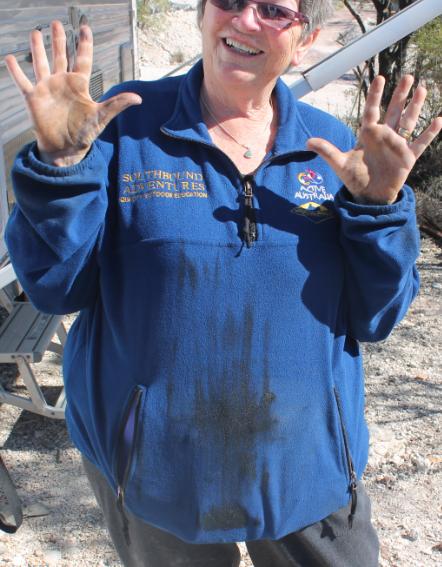 A bit greasy after climbing up the ladder from the mine…

On the other hand, for many of the locals, it’s as much about the lifestyle as the hope of a big find. Quite a number of older people have settled in the area (or come there months every winter, while travelling the rest of the time) and make a hobby of noodling for opals and turning what they find into jewellery or creations that tourists will buy. Sweeneys, the local art and craft store, is one outlet: manned by volunteers, it sells everything from crocheted rugs to opal jewellery. 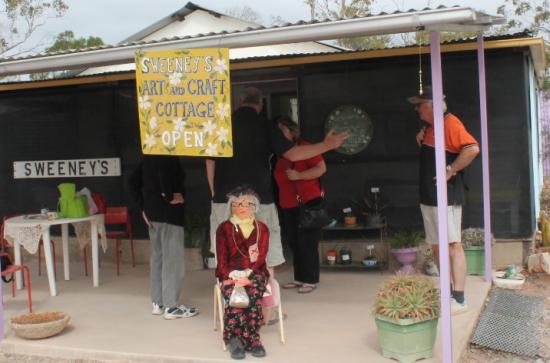 Our few days at Bernie’s was a unique experience and one we wouldn’t have missed for the world.  We had a great time, learned lots and made more new friends. (We’ve been invited back, and we’re coming!) 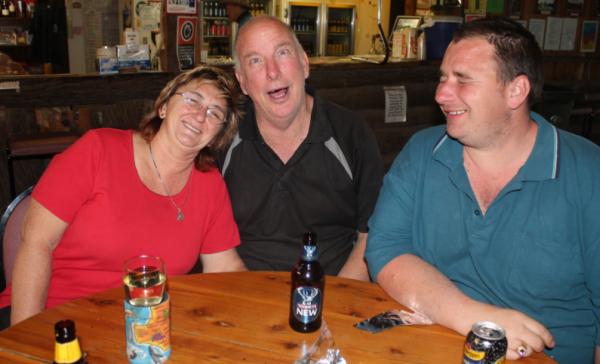 Our hosts: Linda, Bernie and Nathan 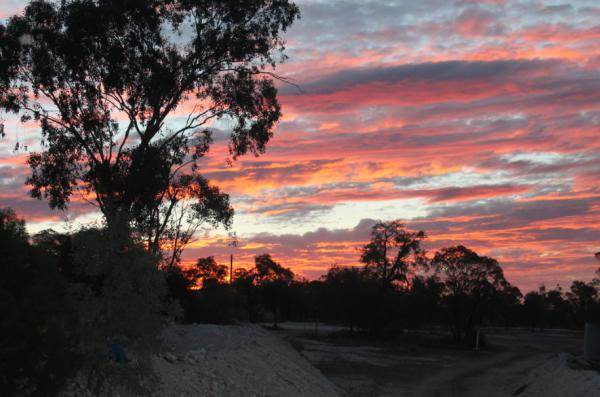 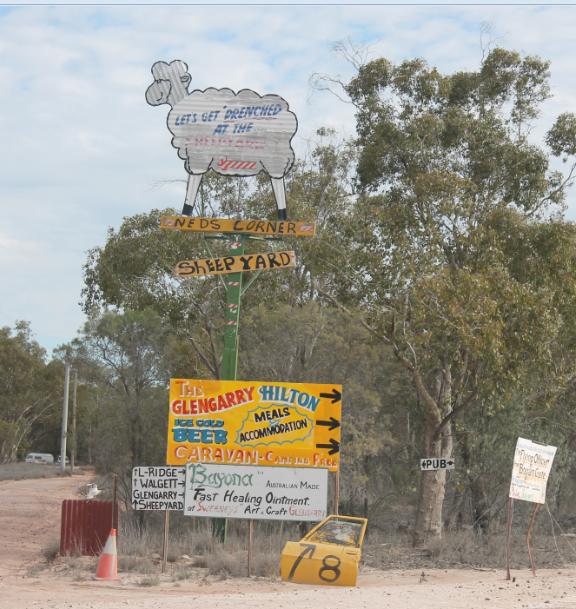