We stayed for one night at Blackall campground. There was plenty of room – we set up so we could get the morning sun, which also worked out well for shade at Happy Hour. (It’s handy to have a compass on your phone/ipad to identify East/West etc.)

By the time we arrived (early Sunday afternoon) the Info Centre was closed, but there’s an honesty system in place. It cost us $8 (per RV, not per person.) There is a toilet block across the road and apparently hot showers nearby: we didn’t use them, but others had and said they were fine.

The campground is near the Barcoo river, but when we got there it was pretty sluggish next to the campground.

Dwarfed by a road train at Blackall

Blackall township (a short walk from the campground) has an IGA, two pubs, a bistro, cafe, some small shops and businesses. 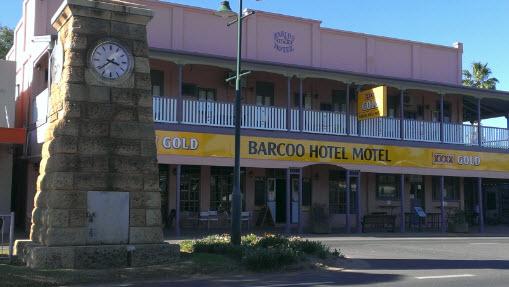 We chatted to Tony and Judith at Happy Hour; they were looking forward to heading off to the Birdsville Races. This is one of the things on our bucket list! Maybe next year…? (That’s the good thing about caravanning: there’s always next year!)

We decided to stay at Ilfracombe, 27 kms out of Longreach, because of (what else?) word of mouth from other vanners. We are so glad we did! This is one of those places we’ll revisit when we’re in the area.

Cathy (after ably steering us in; another talent) was very funny entertaining us that evening in their Happy Hour shed; she has a great comic sense of timing. We started at 5.30 and didn’t get back to the caravan until 8 pm, staying back to chat to everyone. As it turned out, the whole family is getting in on the act. Two nights later it was Jesse, Cathy’s husband, who kept us laughing, along with their two kids, Khloe and Jaxon! It’s terrific to see outback bush poetry and stand-up done so well. 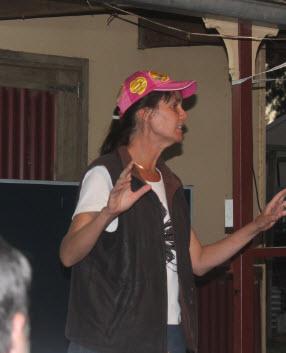 Cathy entertains us at Ilfracombe

Although there were “No Video Please” signs up, Cathy graciously gave permission for us to shoot a quick ‘taster’ with a  line or two from each of the family. We think they’re all fantastic! Here’s the YouTube video…

We met quite a lot of people there we’d love to stay in touch with: John and Jenny; Jim and Jennifer, Graham and Heather; Sharon and Darrell (of course we couldn’t resist calling them Shazza and Dazza) and Peter and Jan. That was just on the first night! Then there was Dave and Gail, Chris and Alex, and Les and Rhonda… just to name a few! Ilfracombe seems to be just one of those parks: so social and friendly that it attracts people. (Loved Le’s story about how he met Rhonda – he watched her digging a trench in the blazing sun then when he finally inquired what she was doing, had to tell her that she shouldn’t be digging it uphill… I was glad to hear that he then stepped in to dig one in the right direction! How could she help but fall for him…???) 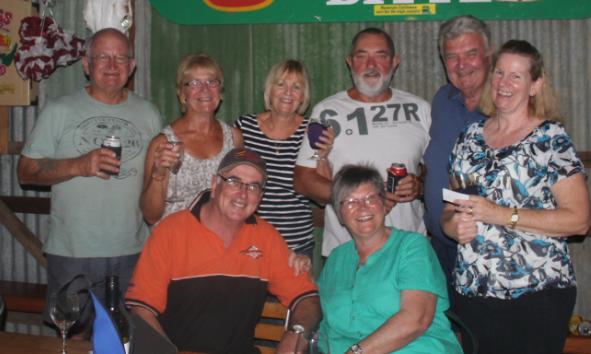 John, Jenny, Jim, Jennifer, Graham and Heather with us in the Ilfracombe Happy Hour Shed 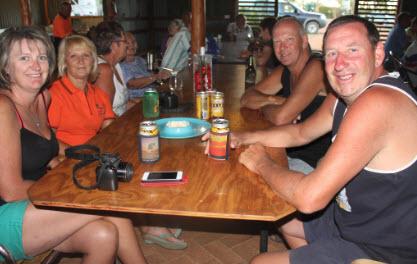 Just as we were leaving, we bumped into Bruce and Marg Gow from What’s Up Downunder.  We were all on our way to Winton, so another happy hour seemed on the cards… 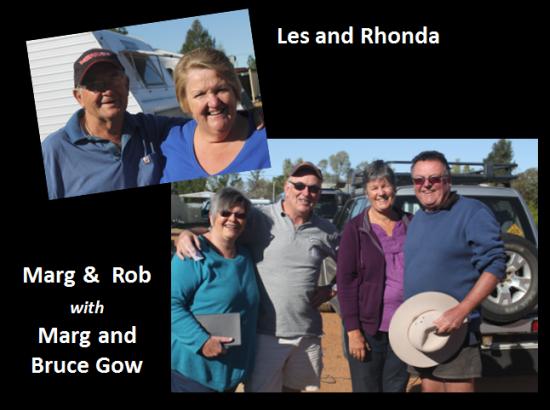 It’s a tough life out here. 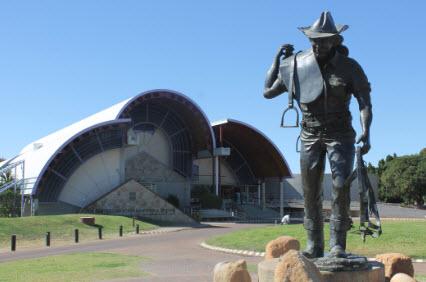 We did the usual browse-through: I hunted for a copy of Legitimate Bush Woman, a book written by a friend of mine, Raelene Hall of Ned’s Creek Station near Meekatharra, but they were all out. I have a copy anyway… I just wanted to have a photo of myself with it in the Stockman’s Hall of Fame!

We returned the next day for the Lachie Cossor’s Outback Stockman show, which turned out to be good family entertainment. There were a few kids there who got a kick out of the dressed-up ponies and dogs and some slapstick humour, but all the adults got a good laugh out of the antics of the horses as well. (We also enjoyed seeing the endless stream of trucks and caravans going by on the main road visible in the distance behind the arena. There sure are a lot of caravans out there, people…) 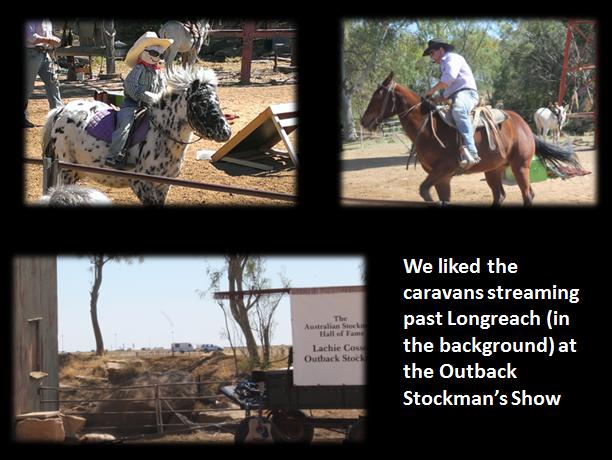 Longreach is also a good spot to catch up on a bit of shopping if you need to stock up on clothes or supplies (or hats, in this heat!). There was one funny incident: Rob and I split up for shopping, and I headed straight for Target (light cotton tops!). I was reaching up to inspect one when I heard a questioning: “Marg…?” It was another caravanner, Maria, with  husband Bob in tow, who recognised me from the C&M DVDs. I agreed I was indeed Marg, and started to explain that Rob was elsewhere in the town: “Rob and I have split up…” I got no further before Maria gasped and said “Oh, I’m sorry to hear that!” with a mournful expression. “No, no,” I said hastily, “We’ve split up FOR SHOPPING… we’re still a couple!”

Here’s a photo that I asked a nearby shopper to take. See, you never know who you’ll meet in Target… 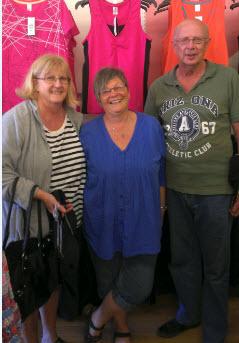 Maria and Bob at Longreach Target