It’s time to head back to Mildura for our trip along the Murray, and we decided to stay overnight in Warracknabeal. This proved to be a good choice, with inexpensive site fees, a lovely location next to the river, and a nice café for lunch (the Pharmacino). Just across the road from the park, Apex put in a nice little walk around the river as a Bicentennial Project in 1988.

Warracknabeal is part of the Yarriambiack Shire, and handy to a few popular locations (Horsham, the Grampians, and lots of smaller towns such as Ouyen, Hopetoun and Lake Lascelles, St. Arnaud, Dimboola, Nhill and Stawell.)

We opted for an ensuite site at $20 a night (powered sites were $15) and since the township is only a few blocks away, we didn’t have to unhitch. 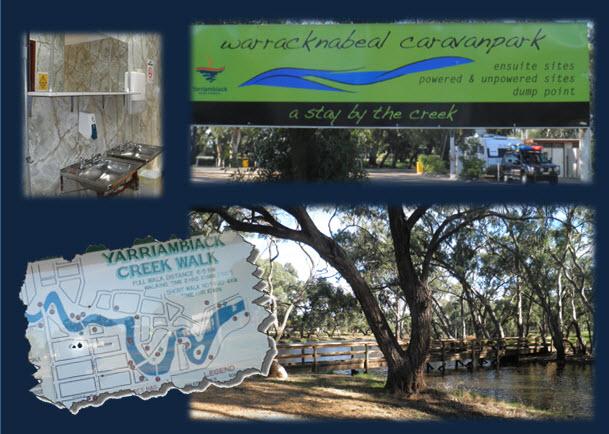 We had been planning to stay at Warracknabeal on our trip south to film the Great Ocean Road segment, but after heavy rain and flooding, the roads were impassable and we had to detour. As you can imagine, the floods have affected a lot of businesses in Victoria. When we finally made it to the town, we found that Malcolm, the manager, had come up with a special deal to bring back tourists to the area. And what a deal it is!

After overnighting in Warracknabeal, we drove on to Mildura. There was still a lot of water lying beside the roads, so we can only imagine how devastating it was for locals when they were all flooded.

At Mildura, we stayed at Big 4 Mildura/Deakin. There are several caravan parks right on the river in Mildura, and at times we all simply want peace and quiet and serene surroundings. Sometimes we want to stock up and have easy access to a shopping centre. That’s why we like the convenience of this park – we can go shopping and leave the car back at the park!

It’s not often that you can walk out of a caravan park’s back gate and not only find a Centro across the road, but also a bottle shop, a bakery, a Cheap as Chips discount store, a Bob Jane T-Mart, and a Supercheap Auto all within 200 metres, without crossing the road! (And a few minutes down the road in the car will take you to a camping store, Spotlight, a Harvey Norman, and a whole lot of other retail outlets.) 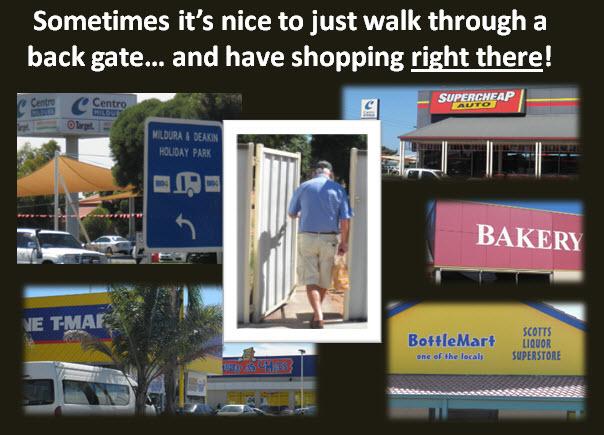 While we were in the park we got to know Jan Batt, who loves travelling in her Avan… it’s the perfect size for her to set up easily when she’s travelling solo. We were especially impressed with her magnetic insect screen, which she had only recently fitted. This is definitely something we want to add to our van! At the moment we have an insect curtain fitted that consists of wide transparent plastic strips, and while it does the job, we do find that we sometimes do end up treading on the strips when step up into the van. 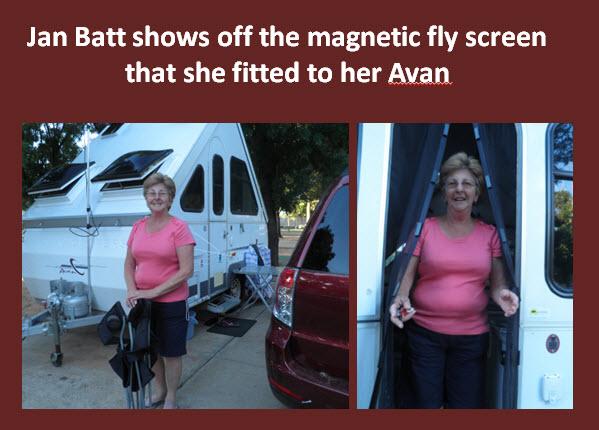 The magnetic fly screen caught my attention immediately when Jan stepped out of the van: it just parted in front of her and snapped back as soon as she was through it. Magic! She tells us she bought it online for around $80 (I think it was actually a 2-for-1 deal, so if you team up with someone else you can get it really cheaply!) Jan fitted it with stick-on velcro strips, because she wanted to be able to take it down and store it easily and quickly when she folded up her Avan.

Rob also had to do a bit of minor maintenance; he’s been getting a bit of flickering with the image from the rear vision camera while we’re driving along. The electrical connections can easily get a bit of dirt or grit in them which will affect performance, so he got out his trusty multi-tool and cleaned things up a bit.

Break here to ask Rob: “Would you like to say anything on the blog about doing maintenance… you know, when you were cleaning out the electrical connections…?”

Oh, wait, he amended that. Here are his words of wisdom: “Every bloke should have a multi-tool.”

Don’t leave home without one. 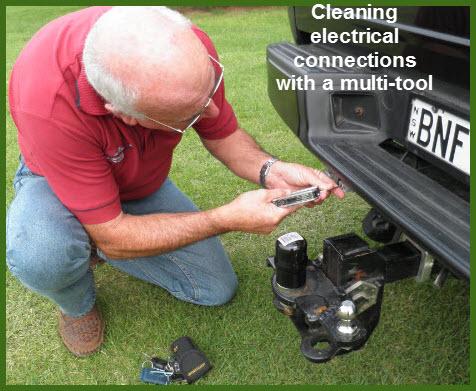