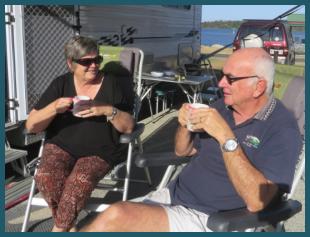 We’ve been caravanners for… around nine years now, I think? Ten, maybe?

We’ve done lots of short/medium trips, from a quick weekend to a journey of around 10 weeks when we made our way up to Airlie Beach for the wedding of our youngest son Paddy and his long-time other half, Tash. That was in… (hang on while I check my Facebook timeline!…) in 2009.

Then, from April 2010 to March 2011, we did the ‘big one’ – the trip around Australia, with Caravan & Motorhome on Tour. We saw so many wonderful places that we can’t even begin to list them! It’s amazing how quickly that year went – it seemed like such a long time to be on the road when we started out, but the time just flew. Now we have a book full of terrific spots that we want to revisit (or see for the first time, because we missed them the first time around.)

In January 2012 we bought a new tow vehicle, a Mazda BT50, and in March we took our Northstar Windeyer van in to have some modifications done – adjust the table height for recliners; install a full shelf over a benchtop; reposition the TV arm and install a washing machine.

All of which has, of course, been recorded on the blog!

Now we have sold the too-big family home and settled into our new home. We have also settled into our new routine – which is pretty loose, really: home for part of the year and on the road the rest of the time! Our trips will be anything from a weekend away to three months – and as of September 2013 Marg has taken on a new role: Editor of Caravan & Motorhome on Tour. Fits perfectly with our travelling lifestyle!